Maybe By Next Year 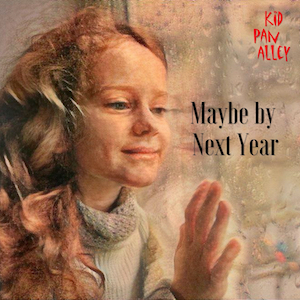 Maybe By Next Year is a collection of songs written with kids and recorded during the Covid-19 Pandemic. The songs are a glimpse into the thoughts, dreams, fears and frustrations of children as they experience life during lockdown. They reveal their deepest feelings, hopes and healing as honestly as only kids can.

Kid Pan Alley has provided a platform for kids to write about almost every subject imaginable, but during the pandemic, their songs focused on what they were going through, their struggles, and what the world might be like when this is all over.

MAYBE BY NEXT YEAR

(Washington, VA)  Kid Pan Alley appreciates the depth and power of lyrics written by children.  Over the past two decades, KPA has written over 2,800 songs with 70,000 children about almost every subject imaginable – tapping into their emotions and passions.  But, during the Covid-19 Pandemic, the kids mostly wrote about what they were going through, their struggles, and what the world might be like when this is all over.  Maybe By Next Year is about their deepest feelings and their healing.

Maybe By Next Year, on Kid Pan Alley Records, memorializes the points-of-view of young people living through unprecedented times, as well as other life-affirming and life-altering events – in their own words. The album features some of their favorite singers including Darrell Scott, Randy Kaplan, Billy Jonas, Robbie Schaefer, Natalia Zukerman and many others whose vocals seamlessly complement the material.

The past 18 months have challenged these young songwriters in unexpected ways.  And the results are both personal and universal.  The album opens with “The Day the Stars Reached the Earth,” imploring care for our world.  The title song wistfully wonders about how life may improve by next year – perhaps a better, new world.  The disruption of in-person contact signals a social life that is “Dead on Arrival” and leaves kids “Staring Out My Window.”  Hope and humor prevail in anticipation of the day that we can “Tear My Mask.”  The memories of lost loved ones remind us that “Small Things Make a Difference.” Understanding, support, empathy, and trust are what are needed to build a “Bridge to Peace.”  “No Limit on Hope” compels action and positive attitude for change.  “I’ve Got a Whole Lot to Say” but no one to say it to – internet relationships are just not the same as in person.  Upon hearing the news that they are adopted, a child recalls their response: “I Think I Blinked.”  The album wraps with the hopeful “Together Again.”

Exquisite production is a hallmark of a Kid Pan Alley recording.  Producers Ryan Benyo and Paul Reisler again deliver a sound respecting and supporting the message of each song with instrumentation highlighting outstanding vocals and formidable lyrics.

Instead of the customary in-person workshops, KPA’s Founder/Artistic Director Paul Reisler guided this process virtually in schools across the country.  “Maybe By Next Year is an album of songs that honors the work of the children during the pandemic while inspiring the rest of us with hope for the future,” says Paul.

Kid Pan Alley’s mission is to inspire and empower children to work together to become creators of their own music and to rekindle creativity as a core value in education through the group songwriting process.  This mission has taken them from Virginia to Hawai’i.  The songs are a sophisticated and powerful worldview as seen through the eyes of the children.  Recorded by artists including Amy Grant, Sissy Spacek, Delbert McClinton, Cracker, Kix Brooks, Nashville Chamber Orchestra, Corey Harris, Suzy Bogguss, KPA has won numerous awards including Parents’ Choice Gold, WAMMIE, and a GRAMMY nomination.